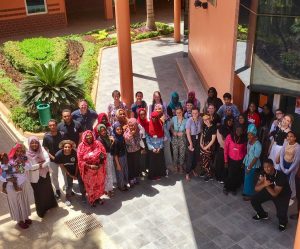 In late 1996 Lillian Craig Harris, wife of the then British Ambassador to the Sudan,  Alan Goulty, decided  to help disadvantaged Sudanese women through university. Because perhaps 90 percent of the women of the Nuba Mountains were illiterate, she chose to focus on them and named the effort in honour of a recently deceased Episcopal clergyman, Bishop Kurkeil Mubarak Khamis of the Diocese of El Obeid. Her initial plan was for a handful of women to  be sent to university.  Instead, the Nuba women’s great longing for education took over the project and, in the spring of 1997,  they organized literacy classes in Khartoum. By May 1998 there were over 20 literacy classes.  By its second year, the Bishop Mubarak Fund was sponsoring 15 university scholars and had also begun basic and secondary school scholarships. A slogan, “Power to the Powerless through Education” was chosen. By 2004 the Bishop Mubarak Fund was sponsoring nearly 150 young women in Sudanese universities.

After Lillian Craig Harris moved to London in 1999, Together for Sudan was set up to support a number of other small  Sudanese charities and projects she initiated, and  to support the rapidly expanding work of the Bishop Mubarak Fund. A small solar project and medical work were subsumed under Together for Sudan and a slogan, “Building Peace through Service” was selected. A project centre was opened in Khartoum in October 1998. The two charities merged in January 2005. Together for Sudan, incorporating the Bishop Mubarak Fund’s work, was  registered with the Sudanese Humanitarian Affairs Commission as an INGO. 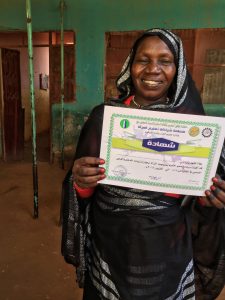 A proud literacy graduate with her certificate

In January 2005, Together for Sudan opened its second project centre, in Kadugli the capital of the Nuba Mountains. In January 2006 we began, with partial funding from the British Department for International Development, a three-year project called “Education for the Nuba”. Over the following  three years we trained  at least 60 women’s literacy teachers, 155 pre-school teachers and 60 basic school teachers and then placed them with in-service training with local schools,  a  pioneering project  changing the lives of thousands of women and children. The literacy teachers were trained in tedynamic Reflect method, an intensive course which typically allows 80 percent of the students to become literate. Violence and civil strife in Darfur, Kordofan and the Nuba Mountains led to the closure of the Kadugli office in June 2011.

In mid-2005 Together for Sudan began looking for funding to expand  similar  educational work in the settlements for displaced persons around Khartoum. This became possible in 2006 thanks to the generosity of the Spanish charity Manos Unidas which funded training of literacy teachers and basic school teachers from among the displaced persons in the Khartoum area.

As a result, over 180 men and women have been trained as teachers, children have received at least a basic school education and women  have become literate and gained the potential for employment. 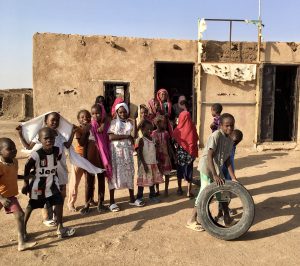 In  July 2011, following many decades of civil war, South Sudan declared independence. In 2013, the charity was renamed to Women’s Education Partnership to reflect our work in both Sudan and South Sudan.  Its success is primarily due to the great desire of women for education, but  it is also due to our dedicated staff  and volunteers in Sudan who have set up projects, to the hard work of Sudanese teachers and to the unstinting generous support of people, both in Sudan and elsewhere, who have helped Sudan through over 20 years of change.  Under the directorship of Peter Hullah, Women’s Education Partnership grew to include projects which embody our wholistic aims and ethos, currently supporting  basic education for 300 primary pupils p.a., adult literacy classes for 400 women p.a., and providing scholarship to enable 130 talented young women to undertake 5-year university courses in healthcare, education and psychology.

We also provide much needed eye care outreach programmes to thousands in remote communities– if you cannot see, you cannot read! We are now returning to teacher training programmes for elementary teachers, and are working with partners to help provide literacy teaching in South Sudan.

During the past 2 decades the country witnessed great troubles due to the political unrest that existed. After the success of the revolution a sense of relief prevailed due to the democratic transformation which started three years ago. Many opportunities provided for both INGOs and NGOs, as some donors started to return after they quitted in the past regime & with a number of new donors including funds from Europe. Also, a comfortable atmosphere for the implementation of the project was created due to the flexibility of the officials

This of course was no longer lasting when the military procedures occurred on October.21 to bring the country back to the first squire due to resistance of these procedures internally and externally.

So many challenges and difficulties face the work.