Sudan witnessed heavy rains and floods 2021 which affected the whole country especially the poor people. WEP is working in a very fragile area where most houses and schools are built of mud and straws and roofed with plastic mats and mud, so, the area was seriously affected by the flood. Namely the schools that are supported by WEP. A quick survey was conducted by WEP staff to estimate the damages. 4 out of the 10 supported schools witnessed great damages.  As 2 classes were completely wrecked and the teachers’ office collapsed at a school in Salaam village at Jabal Awlia locality. All the teachers were gathered in a small office which was also half collapsed at the back wall.  2 classes at another school at a neighbourhood which was one a displaced camp at Sharq Elneel locality also collapsed, the roofs of the 2 classes were stripped off. A wall of a 3rd school at Dar elsalam B 52 at Umbadda locality fall down as well as 2 classrooms half collapsed. Also a school at Dar elsalam B 34 drowned in the water as the school yard was very law so the rain water covered it inside and surrounded it from outside which causes 2 classrooms walls to collapse as well as the head mistress office.

WEP took another tour in the affected schools accompanied by a construction technician to estimate the amount of the damage and the needed intervene.  WEP provided the materials, and with the assistance   of the schools heads and the parents committees WEP succeed to rehabilitate the schools before the study year started.

The initiative was highly appreciated by the schools’ heads and staff. They were so happy with it. It really made a difference, at Jihad school at Dar elsalam B 34 they said about 13 teachers were using the same office including the headmistress, as they left their office for fear to collapse on their heads at any time.  So the new office provided a good solution. 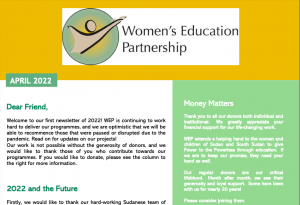 The Big Give Christmas Challenge 2022

This December, Women’s Education Partnership is participating again in the Big Give Christmas Challenge, the UK’s biggest online match funding campaign.  Any donations made between 29th November and 6th December made to WEP on the Big Give website will be doubled thanks to The Coles-Medlock Foundation championing our cause.

Click here to visit our Big Give donation page 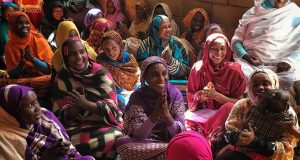 Thank you for supporting WEP in helping disadvantaged women in Sudan and South Sudan.